A new video just came out, featuring an interview with the head of a large, award-winning, digital agency that almost gave up on producing websites because nothing could create sites that were up to their standards — until they discovered MODX. It’s very interesting to hear the process they went through, and the radically different experience their clients had after switching to MODX. Click the image below to watch! 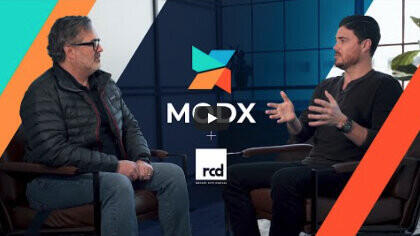 Are you wishing your website could work a different way, or have new features or a new look? With MODX, it’s easier than you may think.

I was recently in a group meeting with a client discussing a new project they want to launch. They were exploring whether it was better to launch the project as a separate website or just put it somewhere in their main site. They clients wanted certain features in the new project content that weren’t on their main site, and it became clear that they assumed the main site had a certain “system” that wouldn’t allow other features.

I proposed making the new project a microsite within their existing website, and showed them how I had done this for another client. The microsite had the same header as the rest of the site, but under that was a different layout with its own navigation. It was wonderful to see the expressions on everyone’s face when it became clear that there was no limit at all to what could be implemented on their site.

Most popular CMSs do have some sort of “system” to one degree or another, so my clients’ assumptions weren’t entirely unfounded. But MODX is not a system; it’s a framework. You can build whatever you want on top of that framework. As one MODX programmer put it, when people want a Wordpress site, they seek out a person who makes “Wordpress sites.” But MODX developers can’t market themselves this way because there is no such thing as a “MODX website” (see this post). You literally can’t tell that MODX is behind a website by looking in the HTML code. This means you can keep the code lean, making for fast page load times (take a look at the chart here and . .

There are lots of ways to editing things in MODX, and for the most part the site manager is a pretty intuitive system. But sometimes it’s not immediately obvious how to update certain kinds of content. You’re most likely already aware of how right-clicking on an item the Resource Tree works to add pages, publish/unpublish, delete, duplicate, etc. There are a number of other elements that don’t have “edit” buttons or links on text,

A major update to our content management system of choice, MODX, is getting closer to completion. The MODX team is pulling out all the stops and trying to get this finished by the end of January 2022. Version 3 is going to bring a lot of changes: an updated user interface, more modern and efficient coding behind the scenes, 100% mobile compatibility in the site editor, bug fixes, and much more. I’m eager to see what our clients will think of the new system.

We recently completed an update to the website of one of our clients, Razia’s Ray of Hope. Razia Jan has been working tirelessly to make education available to girls and women in Afghanistan for many years now. With the current situation in that country, it’s more important than ever to do whatever we can to support Razia’s project to improve women’s rights and equality. Please visit the website, get informed, and, if you can, make a donation to support this effort.

WebsitesKeeping You Up to Date
October 31, 2021

For a few years now, we’ve been using a tool called “SiteDash” that lets us view information about every MODX website we have. It’s a real time-saver and helps us keep all our websites up to date. It alerts us of any plugins that have updates or security patches, and we can click one button to update those plugins across every website we’ve developed. In a matter of minutes, a hundred websites can be brought up to date. SiteDash also keeps track of website errors, SEO performance, the status of domain name registrations, SSL certificate validity, and more.

As part of our partnership with you, since SiteDash makes updating so easy, we provide this service at no cost to you!

Several of our clients have recently sent us copies of a type of email that is going around. It claims to be from “cPanel,” which is the hosting software used by just about all of our clients’ hosting providers. The email says that you have run out of disk space, and that you need to log in to fix the problem. Please don’t click any links! The links will take you to a phishing site that is designed to capture login information the hackers can use. If you get any email that says there is some problem with your hosting, and you are not absolutely certain it is valid, please forward it to us so we can take a look and see if there is actually a problem.

Website hacking has become more and more frequent and sophisticated in recent years. We’ve developed some custom tools to help us discover all the files installed by hackers and get rid of them.

One addition to our bag of tricks is a file tracker that runs in the background, recording any executable files that have been added to or deleted from a web server, and also any that have been altered. When any change is noticed, an email gets sent to us so we can investigate and remediate hacking before anything terrible happens. We’ve been rolling out this feature to our clients’ websites over time.

I make a point of keeping up on MODX news, improvements, updates, and techniques, always seeking to expand my knowledge of this wonderful tool. Today I read this on a MODX developer’s blog, in a post exploring why MODX isn’t more widely known:

“When someone builds a website for a client, they are building a website, not a MODX website. The fact it uses MODX under the hood . . . is for the most part irrelevant and transparent. MODX is used as a tool to deliver a project, which is important, but not what defines the project. Many of the developers, designers and agencies that use MODX also recognise that MODX may not always be the best tool for the job, so aside from MODX they might also use WordPress, Drupal, Magento or something else completely, depending on the project. . . . A lot of WordPress developers are simply tapping into that brand recognition by explicitly providing WordPress services. They sell WordPress websites instead of websites.”

Sometimes, you may want to create very short URLs for a page, for instance when you want to promote a page on your site and have an easily remembered URL to use in your promotional materials. MODX provides three different ways to do this. We get regular inquiries about this, so we’ve just added a page in our online MODX manual detailing the different methods, and the reasons why you’d want to use one rather than another. Log into the MODX manual (use the link under the Site menu when you’re logged into your website manager) and see the new page “Short URLs” in the MODX Basics section, under Editing Pages.

PublicationsAre You a Baseball Fan?
December 10, 2015

In what year did Major League Baseball hold its first amateur draft? And who was the first player picked in that draft? Don’t know? Then you need this book. Well, even if you do know, we’re sure there are many facts you haven’t come across yet. Plus, this book is chock full of photos (260 of them!), showing players, equipment, managers, baseball park diagrams, playing techniques, memorabilia, and more. It was challenging to place so many photos in a book and have it all make sense, but we’re very pleased with the result. Order your copy here.

WebsitesBeyond Pesticides Gets an Update
November 07, 2015 We recently converted the website of a long-standing client, Beyond Pesticides, to MODX. Their website is a treasure trove of information about pesticides, including safety and health issues, legislation, programs around the country, environmental effects, and alternatives to toxic chemicals. Their goal is to protect healthy air, water, land and food for ourselves and future generations.

We set up their previous website in 2011 in Dreamweaver, converting it from the old format they were using. There are literally thousands of pages on this site, so we created some sophisticated scripting to import all those pages into MODX and update the various links to keep everything working.

Get into the Halloween spirit by catching up on all sorts of ghost lore. This book is full of details from ghost stories, ghost towns, ghost movies, and haunted houses, interspersed with the Ghostly Gazetteer, featuring short descriptions of all sorts of ghostly encounters around the country. Plus, there are many photographs of real ghosts! Well, you judge for yourself. Highly entertaining and educational. You can order yourself a copy on the Hal Leonard website.

MODX has been updated to version 2.4.2, which contains mostly bug fixes. 2.4.0 was a major recent release, and we highly recommend upgrading if you haven't yet.

PublicationsWe’re in the Twilight Zone
October 07, 2015

Are you a Twilight Zone fan? We just completed this book for Applause Theatre & Cinema Books. Relive your favorite episodes, find out all kinds of facts, review the entire history of the series, learn about Twilight Zone memorabilia, and more! You can order a copy for yourself.